A downloadable game for Windows

Traveling west is dangerous, and you will die hilariously! Your choices of gear change your game play, and unlocking new equipment allows for new strategies! Experience life just before the gold rush.

When a miner is murdered after finding California gold, his spirit seeks to lead others to enact revenge. Every encounter along the way presents a unique challenge with multiple solutions. What will you do if an outlaw camp is in your path? Carefully sneak around, go in guns blazing, or lure a wild bear straight into their midst? This "California Trail" adventure allows you to choose a Wild West career, load up on supplies, and journey through a randomly generated west filled with glory and silly deaths

I really love this game even though it's extremely buggy at the moment!

anyone who purchased it while it’s in development will automatically get the final version :)

The game is super good so far, perhaps add some more weapons and enemies for variety. Story is a bit on the vague side but that could be because it's early access. Overall great job, keep up the good work.

idk i just want to rate this 5 starts

The update is great! Heads up, poker appears to be broken. You lose the hand if you have a pair and an npc has a pair, even if your pair is higher.

Yee hah! 2 days after I buy this, a big ol' new version rolls out. For being the only Wild West roguelike out there(I think), this is ace. Good day-

hey thanks! Update schedule should be ramping up in the next few months too!

Just had a shot of the latest build and so glad to see this excellent indie maturing and improving. A couple of suggestions:

I attacked a gang of outlaws and one of them was killed running into their own camp fire! Whilst this was funny (and you may want to retain for that reason), some improved AI might help. On the other hand - maybe give Outlaws/NPCs differing IQs with the dim ones doing stupid stuff like that.

Something that occurred to me when reading a review of Lost Dutchman Mine (one of this game's influences, if I remember correctly) - the cost of items is way off for 19th century United States - $5 for a pack of matches? It's a minor thing, but might want to consider a money system closer to the historical one.

Keep it up! This is going to be great when it finally leaves Alpha

Well, I bought it just to be sure... And it still has those weird very slow attack bugs. Do you know how to fix this?

I'm wondering if there is some kind of frame rate -> animation issue. I SOMETIMES get this error from other people but it only pops up rarely. Pops up enough I want to fix it though! Would you be willing to try a quick debug build I put together to see if it can identify the error?

Absolutely, I'd love to help fix this issue

Heres a test build, see how reloading and attacking works here. If there is an error it'll pop up a message. https://www.dropbox.com/s/ppn3x3xdl2s1ebl/Duster%20Test.zip?dl=0

Hi there, I played the steam demo and I was left wondering if that's really the same version as the recently released game on this page. When I looked at RandomiseUser's gameplay of this from 2 months ago, all the combat looked like it's supposed to be and he was able to use the knive properly. On the steam version I could not use revolvers (reloading got me stuck in an animation) and the knive was incredibly slow. So were all the enemies. Only the pickaxe was a viable weapon. Does that sound like v007?

Is any update planned love this game cheers!?

Yep! Hoping to have it out in the next month or so!

This game is a lot of fun! There are few games nowadays that make me want to jump into a run right away. Good work! We look forward to the updates that will come. :)

hey thanks for playing!

Thanks for making it :D

Impressive game for early alpha state i was desperatly seeking for a wild west openworld/freeroam I hope this becomes a blast and on steam that would be great, please never give up such project this is an unrefined gem in refining process ;) Ps i found a bug if you click continue and never played before the game seems frozen/stuck. Cheers !

ah good catch thanks! And thank you for the great review!

hey guys!! I am a new player to this website but I have got some advice for you peeps!!😂😂

1)do not mess with me

3)lastly,DONT'T,I repeat,DON'T think that anyone can tease me or bully me or anything like that

What is the point of even prospecting for gold? You don't even get any other towns to trade in once you leave the starting zone. I just used cheat engine to give myself unlimited bandages, food, water, etc. and played through the entire game and have not once found a town. Am I missing something?

I think I figured out most of the keyboard control, but you need to post them somewhere or get a tutorial working.

Been playing Lost Dutchman Mine on emulated Amiga recently and was wondering what a modern spiritual successor could be like. Never imagined big old robots being in it, though.

This is coming along really nicely, guys.

ha ha Its hilarious that you mention it, because that was  a huge inspiration for me as well! Not trying to stay too close to the original though ha ha

I enjoyed playing this game anyway, but the experience was very singular.
My first attempts were as a gold miner, and I died of thirst the next day, then I died of hunger...
NB: The doctor is a bastard. If you do not have the money, you can die, he dont care. It's cruel, even if you do not have enough to pay for the care he should still be able to save your life. (sugg: As long as you have the means to pay, he takes the money, but otherwise he can at least save you and leave you with 2 HP.)

The time to learn how to drink and feed, I took over as a farmer. The key is that the farmer can eat grass found everywhere in the desert... Moo !
It was rather random to manage to set a campfire. Even so, I ignite easily. Impossible to cook, so I fed grass and raw meat. Looking for gold seemed too risky for me with all these bandits around. Equipped with a knife rather than a pickaxe, it was far easier to slaughter them and pick up their loot than to work honestly. I had a lot of fun chasing down bandits and accomplish the revenge of ghost. After that, I was able to access his secret mine. I saw that it did not pay as much as to murder peons, so I stopped there.

I dont feel that the game were working properly. Once equipped with a saber and a rifle, I slaughtered everyone by rushing into the pile. Enemies and creatures were rushing at me, but they did not inflict any damage on me. The bosses allowed themselves to be raped for free.

I'm really not convinced that the procedural generation of the map, or the search for gold actually brings something to the game. Terrorize and steal honest people, or re-establish the law and punish bandits is much more fun.
Also, I believe that a unique map, made by hand would be much more interesting. It would be enough to radomize position of  mines, bantits and camp sites. It would be enough if the location of the mines, or the camps of bandits is random. Whether the shape of streams, or the distribution of trees is different at each game brings doesnt really matter.
I did not understand what brings the steampunk aspect. Some NPCs are robots, but that does not make any difference, and it does not seem to matter.

Good visuals and interesting gameplay, but it certainly lacks something.

The 'throw you into the game' style does seem a little difficult in the beginning since most of the stuff is very punishing and there are bugs which can kill your run. 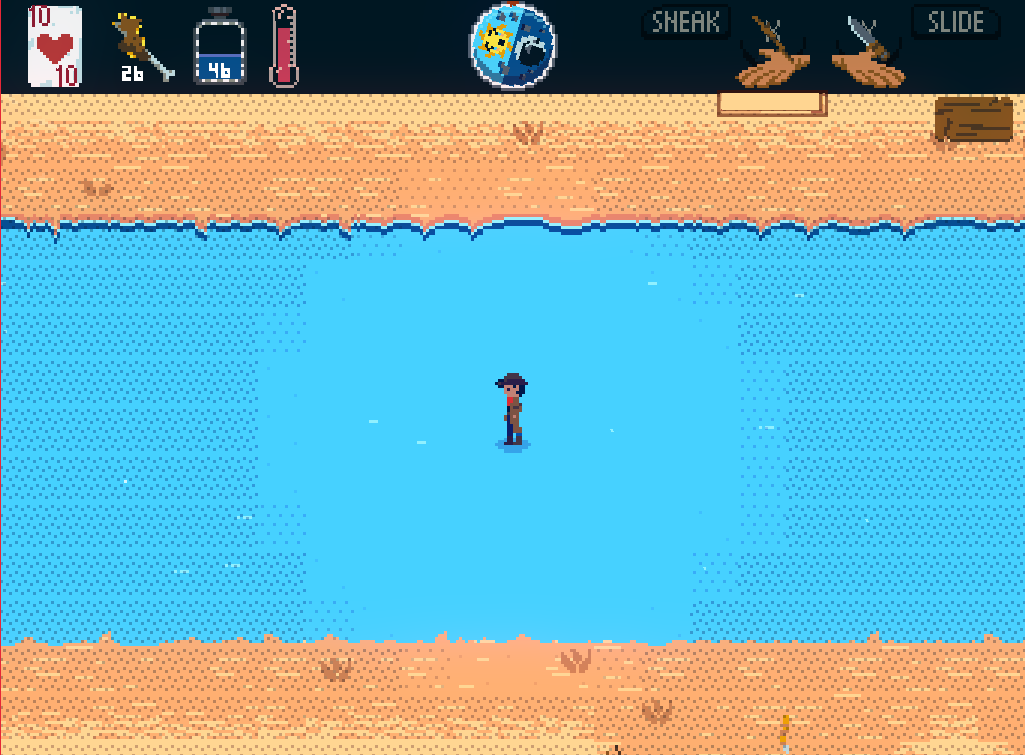 Also the other characters and enemies glitch at times, making them stand in place and become untargetable. Wolves at night when aggro-ed to a town glitch out and start freaking up. Rifle seems wonky and doesn't shoot at times and the food pot is sometimes not for sale in the store, leading to a difficult life.

Overall, its a cool idea and good design, but the bugs can cause the experience to be a little lackluster.

Enjoyed the first 20 mins but then i just started to glitch run for fun since there were barely any rewards.

The game is great. It has good potential. It's simple and straight to the point. I will keep playing it for sure as i want to explore everything it has to offer.

This games great! just need more stuff and you're good to go! Also maybe you could make any enemy without a gun flee when they see you fire a shot, I think that'd help the realism as I can't imagine someone charging at me with a stick while I'm madly firing dual pistols

I streamed this last week - here's my highlights! Overall interesting concepts, but needs some work. Interested in seeing how things progress!

This looks awesome! but it wont start

The game boots but i cant do anything

is this using a controller or keyboard? any system specs?

What are the controls for this game? I figured out Z to start, Arrow keys to move, and C to chat with that dude but that's about it.

when the open the zip there's a file marked "controls"

What's up with this: All i did was run the game for the first time, and once i found out what i suppose is the right key to start playing (Z), I pressed it and the game cut straight to what i suppose is a store, but bugged out with question marks as floor, no walls, just a door and a guy that sells me things.

EDIT: I deleted the save file and now it takes me to the desert.

Hey! Your game looks awsome! Do you need sound designer for it? I can send to you my portfolio if you like. I would love work on that game! Please contact me via email samyrai_hardcore@mail.ru

I am having a problem starting up the game, it takes me to a title screen, but no button or input will start the game.

is this with keyboard or controller 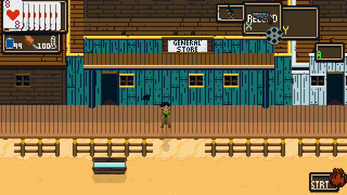 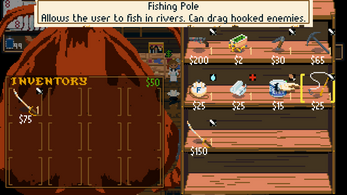